Abby is beginning to understand us more. I told Abby not to go near the oven because it was hot. She started blowing on it. Lol. She also knows what we mean when we say “Sit down”. She likes to stand on chairs, couches, beds, you name it. Just because she hears it doesn’t mean she listens though! 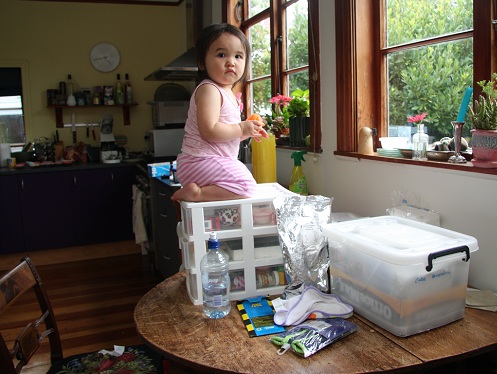 What? I wanted an apricot, from up here.

She’s into climbing at the moment. Her latest feat has been climbing on to a chair, then on to the kitchen table, and then on to the set of storage drawers that I had left on the table!! OMG. 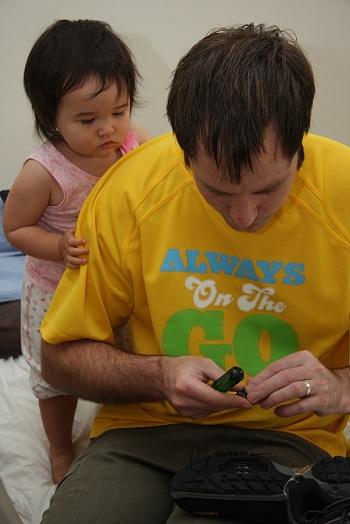 Abby’s also learnt to open drawers and cupboards so anything without a safety lock on it and within reach is fair game. She’s taken dishes out of the cupboards, tried to eat flour, stolen my keys from my handbag and proceeded to use them on the front door… The rubbish bin is also a point of interest, and she’s almost thrown my necklace away while I wasn’t looking. She pretty much wants to see, touch, taste and test everything. Quite often she’ll walk around pointing and going “OoOOohHH. OoOOOOhH!” to say “What’s that? Can I see it? Have it? Eat it? Please?”.

She’s been giving us a lot of trouble in regards to sleep lately. It’s almost every night that she will wake up (at varying times) and not go back to sleep. We have to go through the routine of changing her nappy, giving her some milk, and rubbing Bonjela on her gums because we don’t know the exact reason why she’s waking. It may be because she’s teething (she has two new teeth and at least another two coming through), or her appetite’s increased, or she’s hot and having nightmares. I really hope this doesn’t continue for too long because it’s starting to feel like a permanent hangover from the lack of a good night’s sleep.

Apart from that, she’s still my curious, cheeky, chuckling girl.