I love how tots speak. Abby knows so many words that I’ve stopped listing them. She’s stringing more words together now, and can see the relation between similar things – according to Abby, my breast pad is a “mummy nappy”. 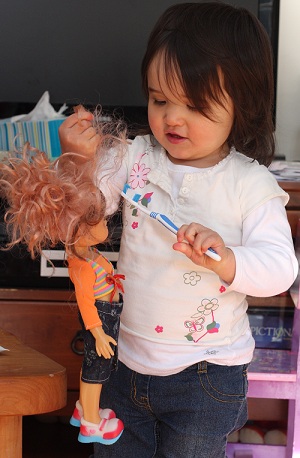 The other day she grabbed her doll and a little monkey was tangled in the doll’s hair. She said “ooh ooh ah ah, doll hair”. She can’t say monkey yet – she’s only started naming animals instead of just their sounds. Her nursery rhymes book is now her “baa baa sheep” book.

When we sniff her suspiciously she says “No poo”, even if there is because she hates nappy changes.

After coming home from the park one day she stares out the window all sad-like and says “No more slide. No more swing.” So sad! 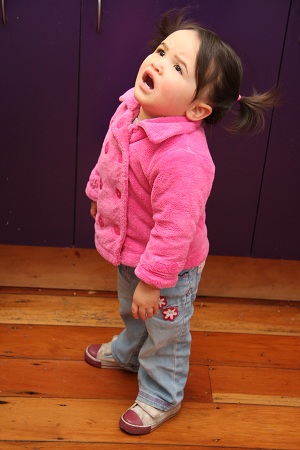 As we left the doctors’,  Abby had to say goodbye not only to the doctor, but also the chair, and the clock (which was actually the scales).

When I make her stop watching Hi-5, she says “bye bye Hi-5″ and even waves to the TV. When she wants to watch it again she fetches the remote and says “mote” as she shoves it in my direction. When she would rather watch it on my computer instead of the TV, she says “Hi-5 puter”, and attempts to fetch my laptop for me.

She puts my knickers around her like a necklace and says “unnie”. I tell her that the big undies are daddy’s, and she picks up another of mine and says “big”. Thanks honey.

It’s dangerous when kids start saying sentences. I know how literal and awfully honest kids can be – Abby is going to be a great source of embarrassment very soon!