For some reason (possibly since someone posted it on reddit) there’s been an explosion of reblogging/reposting of my image in the last few weeks.

There’s been a dig at it on 9gag where they think the “Unicorn butt scoot is too mainstream“, and someone has even made an animated version of the Rainbow Shuffle on YouTube. This is apart from probably hundreds of reposts, because you know what the Internet is like…

It’s not so bad as at least I know people love it and feel it’s worth sharing. And I’ve had a few Rainbow Shuffle shirt sales, thanks to the person who posted a link to the source on the reddit post. 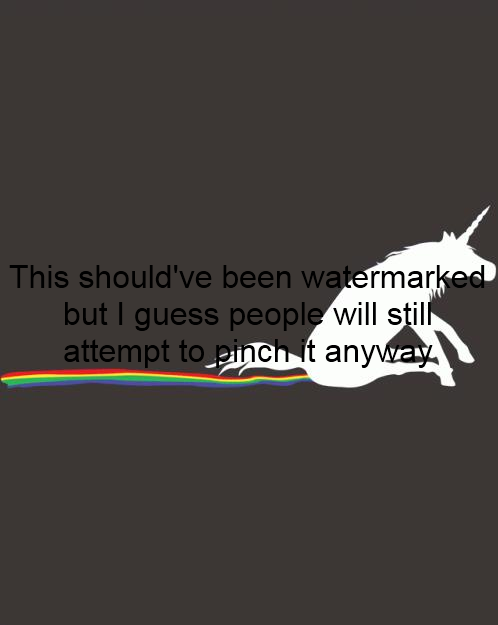 I feel more violated than the carpet

But it’s not so good when people don’t credit the source though – and even worse, when people are trying to make money off all your hard work by putting the image on shirts and such and claiming it as their own! Breach of copyright anyone? GRRR! I’ve already had to deal with a few copycats (most were straight copies of my image, and someone attempted to change it a little in an effort to pass it off as an original idea), but I’ve discovered more today, and there will be more in future no doubt.

Is that the fate of a meme (if this is in fact one)? Boo.

Anyway, if you want a shirt for yourself, just visit my Eggshell Green Shop on Cafepress.

5 thoughts on “Have I created a meme?”